It’s been a week since Brexit and, as forecasted, U.S. government bonds have fallen to historic low territory, dragging mortgage rates along with them. Now, there’s a crisis in Puerto Rico adding more fuel to the fire. It’s possible we’ll see a new all-time record low in mortgage rates.

This morning, the yield on 10-Year U.S. Treasurys dipped to 1.415 percent — that’s the lowest ever! See chart below. 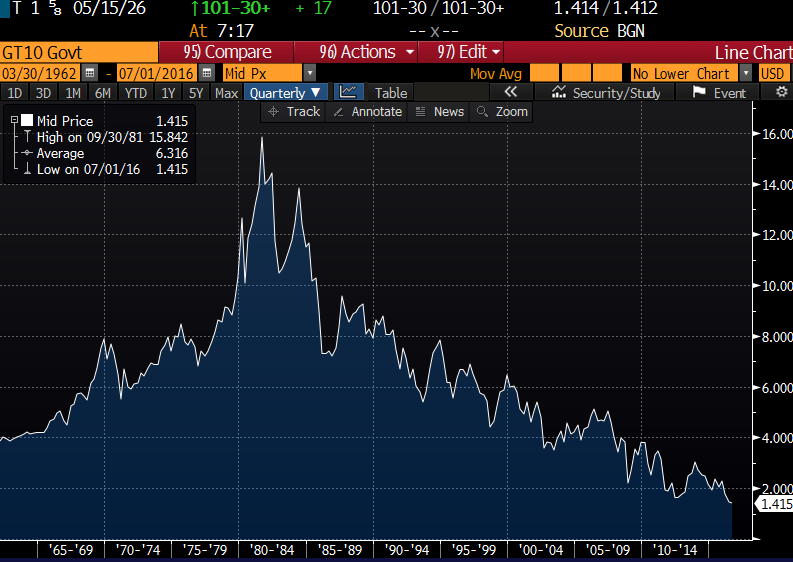 What does this mean for mortgage rates?

Mortgage rates are as low as they were in May 2013 and only 17 basis points away from all-time record lows, set in November 2012.

Is this all Brexit?

Certainly, Great Britain’s surprise vote to exit the European Union has sent shockwaves through world markets and pushed investors into US Treasurys. Plus, on Thursday Bank of England Governor in a widely anticipated speech indicated more economic policy easing and stimulus would be needed to help Britain overcome the slump likely to follow Brexit. Analysts are expecting British central bankers to cut rates later this summer.

We also have our own monetary problems now to deal with in the U.S. territory of Puerto Rico.

The island commonwealth is expected to default on nearly $2 billion in bond obligations today as its fiscal crisis worsens. Governor Alejandro Garcia Padilla issued two executive orders Thursday suspending payments on the general obligation bonds and declaring a state of emergency at several of the island’s agencies in order “to ensure the residents of Puerto Rico continue to receive essential services while the Commonwealth continues to face a delicate financial situation,” according to a statement issued by the Governor’s office.

President Obama signed a bipartisan bill rushed to his desk on Thursday that is designed to restructure Puerto Rico’s $70 billion debt burden and stave off bondholder lawsuits against the government.

What does all this add up to?

More volatility in markets. More uncertainty about economic growth. And more motivation to buy US Treasurys, pushing yields and rates even lower.

Enjoy your July 4 holiday weekend. Then buckle up for the second half of summer.